Comic Con Scotland is coming up fast and already has a huge array of stars to draw in the crowds to the Royal Highland Centre this October, with names such as Jean Claude Van Damme and Christopher Lloyd already being announced and now its about to get bigger.

He was a very close friend of the legendary Bruce Lee and has appeared in countless movies over the years and is perhaps best known to western audiences as Chong Li the man who went toe to toe with Jean Claude Van Damme in Bloodsport, and simply as Bolo in Enter The Dragon!

Bolo is retired from movies now, but his physical presence is all to visible and this huge hulk of a man is now in his seventies and this will mark his first appearance at Comic Con Scotland and any show in the UK!

From the Press Release!

But that is not all, as joining the roster of stars at Comic Con Scotland this year is a man who can only be described as a living legend and one of the biggest names in pro wrestling ever!

Mark Calaway has been a pro wrestler for a long time and during that tenure has gone from being a good guy to the ultimate big bad and is loved the world over (see my article on his counterpart in the game Rumbleslam over on Gamers Web for more details) and is known to millions as the undead/dead Undertaker!

From the Press Release 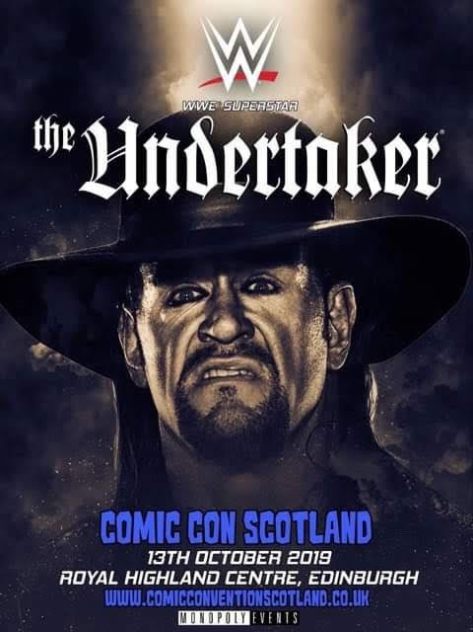 OFFICIAL QUOTE FROM THE UNDERTAKER:
““Undertaker has indicated how excited he is to see his fans as he returns to the UK. He is looking forward to greeting as many followers as possible.”

Tickets will be available from our websites or via Ticket Quarter: 0344 800 0410 (after the announcements have been made)

Look out for more announcements on our social media channels:-