Marvel Crisis Protocol is due out November 15th and as gamers all over the world ready their games boards and paint up terrain in anticipation of the games imminent launch, Atomic Mass Games give us a glimpse at what is to come.

We have already seen some of the masters for future releases beyond the core game and the initial first wave, which includes MODOK, Hulk and the NYC Terrain pack, as well as Black Panther, Killmonger, Sheree, Okoye, Venom, and the dumpster truck!

Now just teased by Atomic Mass Games are the next wave of releases due out in early 2020.

Thor, Prince of Asgard and Valkyrie will feature the legendary thundergod and one of the fiercest warriors in all of Asgard! While Thor will look familiar to most, Valkyrie is based on her comic book counterpart and not the Tessa Thompson version as seen in the movies.

Of course the Odinson needs a foil to play off against and who better than his adopted brother Loki the eponymous God of Mischief and Mayhem, and throw in the ruler of the dark domain of Hel with Hela and you have a force that is.going to really cause your opponent problems.

Next up we have two Avengers who are fan favourites The Vison and Winter Soilder which should please a lot of people and add more to the roster for the Avengers, joining Captain America, Captain Marvel, Iron Man and Black Widow from the core set!

Finally we get another terrain set which features two vehicles in the form of an Oscorp tanker and Damage Control Garbage Truck! 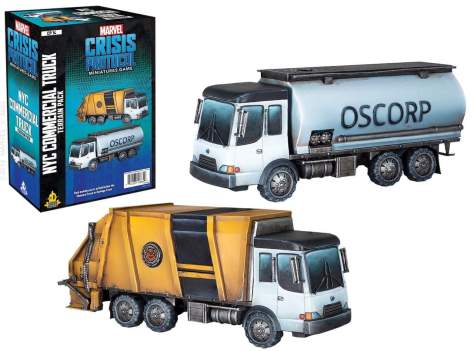